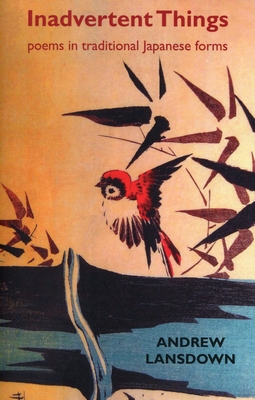 So Lansdown writes. He’s right: the senses come alive in the gentle words of these poems on the Australian field of his page. If sonnets are standard roses, these haiku and tanka are nasturtiums growing wild. Nature’s minutiae are celebrated here, along with the warmth of loving relationships. Lansdown’s point of view is consistently humble but his moods are many—from a rasping blues to a lyrical whistle.
— Andrew Burke

Comments on Andrew’s other books

Andrew’s poetry is much influenced by Japanese short forms such as haiku and tanka that aim to capture the particularity, the is-ness, of (usually) a natural object, animal or scene. The goal is to achieve a rendering of this essence in just a few words. Andrew is adept at both forms …
— Shane McCauley

Andrew Lansdown is an imagist of almost unlimited inventiveness. His observant eye can graze, can focus on the tiniest quiddity and make it perpetual, or it can feast on a subject and draw out an inexhaustible wealth of comparison. …
— Les Murray

Lansdown is one of the most assured of Australian poets working in the Imagist tradition … he has written a considerable number of poems which are perfect examples of their kind. They have a descriptive exactness and a seeming spontaneity, combining to produce a text to which one can imagine no change being made without damage.
— Geoff Page

i
Light on the pond—
one of seven koi facing
a different.

ii
A drifting feather …
my gaze shifts to the tree for
the bird that lost it.

iii
The climbing rose—
a tendril tugs my shirtsleeve
through the trellis.

iv
The unmown lawn—
zebra finches tug at seeds
in the weed-heads.

v
Even in a bun
with bits straggling everywhere—
beautiful, her hair.

vi
Inadvertent things—
sound of the guitarist’s fingers
sliding on the strings.

Though not as pretty
as the ones van Gogh painted,
the irises sprawled
beside the outhouse at least
prove that real life is still life.

That buzz in the note
because the guitarist touched
the fret or failed to
clamp the string with his finger
quite strongly enough,
that slight brief buzz just adds to
the laidback beauty
of the song, making it complete
and somehow perfectly human.

i
Disturbing the lines
of her torso and my thought—
the curve of her breast.

ii
Shower recess
beaded with water ricocheted
from her body.

iii
She feeds the baby
then comes to me. Her body—
everybody wants it!

Andrew Lansdown’s poetry has long been defined by the primacy of the image and a preoccupation with form. Inadvertent Things revisits the themes of nature, family and God through the familiar Japanese forms of tanka and haiku, and also the choka, a sort of extended tanka. The haiku is the form that features most often and always as part of a suite called a gunsaku, where the poems work independently but also cumulatively. All the terms are explained in a short introduction for the uninitiated, in which Lansdown expresses his intention to follow the spirit rather than the letter of the law.

As in Lansdown’s other collections, small details matter. Take the tanka ‘Azure’:

Surely a piece is
missing from the azure robe
of the Madonna
in some ancient mosaic
because of that fairy wren!

Lansdown’s imagery is precise and inventive. The tanka ‘Caress’ is simply one perfectly realised simile:

As in the best translations of classical haiku, seemingly unremarkable details, captured through unadorned language, can produce a satisfying whole in which every syllable counts. This is the first part of ‘Loquats’:

My littlest boy –
dropping from the loquat tree
after his brother.

It is not only the simple but exact choice of words that appeals but the way the syntax unfolds, withholding completeness until the final word sends the reader back to the opening line, creating a perfect circle.

Humour is employed throughout Inadvertent Things, not the laugh out loud kind but the kind to make the reader smile in recognition. This haiku from ‘Frog Cacophonies’ is worthy of the Japanese master Issa:

Oh stop, you jolly
little frogs – it’s unseemly
to be so happy!

Other poems play self-consciously with the idea of form to pleasing effect. ‘Crab Shell Haiku’, for example:

i
Like an empty shell
a haiku offers a home
to a hermit crab.

ii
Like a hermit crab
a haiku offers new life
to an empty shell.

But for all the fine poems in the book – and most of them are good – others fall short. There are places where the writing is overly cute, as in the final haiku of ‘Pygmy Bat’ and the second part of ‘Jonquils and Daffodils’:

The pup of a pug –
That’s how you look, pygmy bat,
with that ugly mug!

The abundance of poetic devices is cloying and the effect of the rhyme above (and in a few other places) lands somewhere between a haiku and a rhyming couplet. There are chokas in the book where rhyme is effective, but rhyme rarely works in haiku because it tends to draw attention to itself and complete or close off at the expense of the meditative quality that is the form’s chief appeal.

In other cases, the lyric is prosaic or flat. The following parts of ‘Birth Haiku’, for example, lack the surprise or the interesting juxtapositions that characterise classical Japanese haiku:

v
A steel suction cap –
the doctor settles it in,
adjusts the vacuum.

vi
This delivery –
who will deliver her from
the doctor’s pulling?

vii
His misshapen head –
the doctor explains, ‘That’s just
where the suction was’.

The inclusion of such material is unnecessary because Lansdown has always been prolific and this book – stretching to 161 pages – could easily have been shorter.

Lansdown is one of our best writers of haiku and poetic miniatures and, for those interested in Japanese forms, this attractive volume is worth purchasing. For those concerned less with such forms, other books by Lansdown, such as the award-winning Between Glances, will be a better introduction to the poet’s work.

Andrew Lansdown is a well-known name in the pages of Studio, and these two new books, both published in 2013, are books with a specific theme and focus. Inadvertent Things is a carefully crafted collection of poems using traditional Japanese poetry forms, the choka, tanka and haiku. Andrew writes with the poet’s precise eye and the insight of the sensitive observer. At the beginning of the book the author provides a helpful guide to reading these traditional Japanese poetry forms, and then immediately provides us with a rich tapestry of nature poems that carefully analyse a moment in nature, an instant in time or a point in life to inform and inspire us. As Les Murray says of Andrew’s work:

Andrew Lansdown is an imagist of almost unlimited inventiveness. His observant eye can graze, can focus on the tiniest quiddity and make it perpetual or it can feast on a subject and draw out an inexhaustible wealth of comparison.

On inadvertent things, Andrew says in one poem:

Could it be, even
though they look like happenstance,
inadvertent things
are signs of Benevolence—
less than fate but more than chance?

Andrew looks within and beyond all that is around us, in nature, in life, and exposes the ‘this-ness’ of this life, and the ‘nature’ of nature. In a personally reflective moment he writes:

A mistake I’ve made
for most of my life has been
to think the mundane
is not really part of my life
but merely a hindrance to it.

Gestures of Love is a fine collection of poems about fatherhood, a rare subject for a whole collection—and this collection explores the whole gamut of fatherhood experience: the joys, the griefs, moments of delight and despair just as Andrew Lansdown looks with a poet’s precise eye at the small things of nature, and sees large signs and deep meaning, so too does he focus on the many moments fathers experience with sons and daughters, and draws rich insights and richer relationships. He truly garners the gestures of love in this collection:

He waves a greeting
then, grinning, skips back to play
How can I gamer,
against the times of leanness,
such simple gestures of love?

This collection is one to savour, one to revisit often, and one to explore. Geoff Page has observed of Andrew’s poetry:

Lansdown has a very sincere and direct way of handling poems about his immediate family which subtly suggests great tenderness without becoming sentimental.

This observation is echoed throughout this special collection, as we are invited into the poet’s mind and heart as he watches his children grow, explore life, question the world around them and face their childhood challenges.