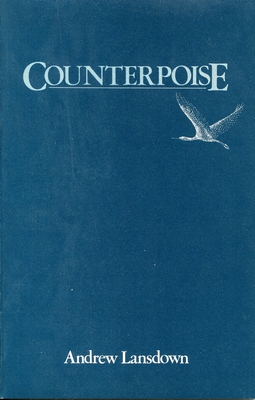 The short poems in this first fully fledged collection by Andrew Lansdown may be read singly or as a sequence that covers the whole of the poet’s life, from memories of childhood through to marriage and the birth of his first child. Poems celebrate a wife and grandparents, animals and birds, the loneliness of the human spirit as well as its communion and identification with others. Always alert to the shapes and textures of the natural world, some of these poems have the frail beauty of oriental art, while others are urgent with social criticism and indignation. They introduce to a wider public a young poet who deserves to be better known outside his native Western Australia.
— Les Murray

Everyone else is asleep
and I am up this early
only to keep my small son from crying.

I carry him down to the river.
A slight mist lingers by the bend.
Trees stand on their heads in the still water.

Has he seen a river before?
I can’t remember.
He raises his hand,

reaching for it.
He looks back at me
to make sure I have seen it.

How can anyone find anything so amazing?
Yet it’s not just the river:
stones, leaves, chickens, fire—

things I still love
though they’ve fallen familiar—
fill him continually with joy and wonder.

Oo! Oo! he says
as if it hurts him
here in my arms, seeing the river

for the first time.
And a familiar strangeness
grips my heart

and I sing to him
Jesus loves the little children
to keep from weeping.

This is what death has done:
Changed him beyond belief
Made him blind and dumb

Turned him cold to the sun
Blown him away like a leaf:
This is what death has done.

Can a tune beat time
On the drum of his ear
Now silence is the sound
That alone draws near?

Seeing his form, we are numb:
For whom did we make this wreath?
He is blind and dumb.

We huddle together as one,
Yet each alone in our grief.
This is what death has done.

Can a maiden dance
In the chamber of his heart
Now his blood is still
And he’s set apart?

My mother mourns her son,
But tears are cold relief:
He is blind and dumb.

The words that twist my tongue
Are bitter beyond all grief:
Look what death has done—
Made him blind and dumb!

Will the Day-Star rise
To the circle of his sight?
Will his tongue peal praise
To the Father of Light?

To this foreboding place,
where students learn through poems
of a season called Spring,
two swallows have come to make a home.

Too unimportant to be noticed
and too unconscious to care,
they skim through the rafters
and weave through the air.

At the end of one rafter
they dab mud for a nest:
it is the only spot
where they come to rest.

Who else would have dared
such a simple, untidy thing
here in the walkway
of the West Academic Wing?

Light refracting on the reach of the river;
gulls and sails embracing the slight wind;
jellyfish clasping the calm water
or bunting the sand in the basking shallows;
posts of wood barnacled and rotten;
small waves lisping upon the shore:
here is an opulence I had forgotten.

And here and there, a scatter of children
scamper across the lawn like leaves
driven before the tempest of their happiness.
Parents and grandparents are at ease
in the shade of trees and in each other’s company.
For these people, things I thought we had lost
have never been open to doubt.

As the sun departs, parties arrive for prawning:
light their lanterns and lay out their nets.
The world again seems young and lovely,
values certain and strong: young men
and old men, friends, fathers and sons
in pairs dissolve into the dark water
and toil together in the hope of harvest.

How ignorant I have been
through these last years of learning,
how weighted down on one side of the scale.
The large, deep things are all
in their own ways dark and hard.
Small things are a counterpoise
to lighten and soften the heart.

“Counterpoise”, the title poem of Andrew Lansdown’s new collection of poetry, speaks of light on rivers, jellyfish, wood posts, children, grandparents, prawning—all simple things that point to the certainties and strengths of life. It concludes:

The large, deep things are all

in their own way dark and hard.

Small things are a counterpoise

to lighten and soften the heart.

Lansdown is a young West Australian poet who is emerging as one of the distinctive voices of Australian poetry. This ample volume reveals him as a maker of gentle, celebratory poetry characterised by an acute sensitivity to the wonder of life, and a perception of “the mould, the snub/ of God’s thumb” pressed into creation.

Counterpoise—the balancing of two contrary realities—lies at the heart of Lansdown’s achievement. It describes both the content and the approach of the poems.

Stylistically, Lansdown leans towards a simplicity of observation and technique which—in counterpoise—often produces poignant insight. His expression is clear and precise, but never mechanical; it operates to clearly convey to the reader the content of the poet’s perceptions and feelings, yet seldom boxes us in to prevent the flight of our thoughts and feelings beyond the poem. Again, a counterpoise.

Lansdown is essentially an observer rather than a philosopher. Nature supplies subject matter continually, providing the chance for spontaneous joy at its beauty or reflective awe at its mystery. Lansdown’s world is an ordered one where all things have their place:

They own the river from here to the sea.

at the merest thought of them.

Lansdown sees in nature both life and death, and here is another mystery, for right in the middle of its horror death paradoxically interfuses with life;

Eggs must be laid and there is

So much dying to be done!

Death is an important image to Lansdown, and juxtaposed against his celebration of life forms another central counterpoise of the volume. Evil is a dissonance in the world, and is often dealt with in death images. Comfort is sometimes sought in vain:

Let me lie on the swell

Of your breasts and hear you breathe.

There is no consolation.

Just hold me and let me grieve.

The poet’s family supplies the other major focus for his celebratory lyrics, and episodes from his life with his wife and small son are portrayed with what approaches an aching intensity, as in these lines from “To Our Son”:

Your mother too excited to sleep

on the eve of your second birthday

and while planning your party, pausing to weep

for the joy and grief of your growing.

Faith in God for the poet is affected deeply by this interfusion of life and death. So powerful is death that even the overwhelming promise of the resurrection and the triumph of good over evil is clouded by its shadow (“Behind the Veil”). Yet the promise is sure—not arrogant with a facile certainty but resting in the stillpoint that God is, in a world that tosses its creatures between the poles of life and death without apology.

God peeps through Lansdown’s poetry rather than overwhelms it. He is “The old Japanese gardener/who keeps the river”, the creator who leaves His thumb-print in His work, the One on the other side of death. And like that “familiar strangeness” that grips the heart (“Sehnsucht”) or the faint strumming of a guitar “as if a bird in a cage/had swept the bar with its wings” (“Behind the Song”), His presence in the poetry tips it with joy.

Andrew Lansdown is a West Australian who over the last few years has built up a reputation as one of the State’s most gifted and versatile younger writers. Counterpoise is his third book, and the first major collection of his adult poetry.

Although the poems cover a wide range of themes and employ a variety of techniques, a notable quality of many of them is their ability to capture small, sharp images. Although these image poems seem at first very simple, the simplicity is often deceptive, leading on reflection to considerable insights about the richness and wonder of nature, the world and spiritual relationships.

An example is the poem “Genesis”:

The pine-cones have split

and seeds helicopter down:

the forest is full

of movement. I reach out, catch

and hold a tree in my hand.

“I Whistle and They Come” is a longer and more complex poem, inspired by an illustration of a Chinese child calling ducks. It is a fine example of Lansdown’s ability to put small things into larger relationships. As the child has conditioned the ducks, so the child itself is being conditioned (and perhaps like them will eventually be devoured).

“The River at Night” shows his ability with a sestina, one of the most difficult verse-forms still current, but one of the most beautiful when handled successfully. Lansdown does handle it successfully, and, very importantly, in this complex poem as well as his other work, remains clear and accessible. It is one of his important achievements that, like e.e. cummings and W. Hart-Smith (poets who have both been influences on his writing), he can be complex and thought-provoking without becoming obscure:

During the night the dogs came

and killed the bantam hens.

We heard nothing but the rain.

All night its tin refrain

smothered squawk and bark and din.

During the night the dogs came.

We find it hard to explain;

and where do we begin?

We heard nothing but the rain.

Perhaps the question is vain:

but were we asleep when,

during the night, the dogs came?

We live in the night’s black bane:

we are sightless men.

We hear nothing but the rain.

And when they come again,

what will we say then?

During the night the dogs came

yet we heard nothing but the rain?

Counterpoise is a book I would recommend for a number of reasons: it should be enjoyed by all admirers of good poetry and of the courageous expression of values, and it is also one of a number of books which could be read with profit by many hopeful and budding practitioners of the art.

One quibble I have (which is not the author’s fault) is that like many books of poetry Counterpoise suffers from an uninteresting cover. Readers should not allow themselves to be put off by this.