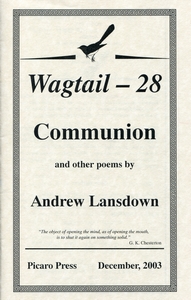 Andrew Lansdown’s poetry is sometimes described as ‘traditional’, in the sense that he often draws on the devices and styles of earlier Imagist poets. He can also write with a warm religious sensibility, and the theme of family is never far from his thoughts. Always accessible and direct, his poems re-cast the familiar in a way that compels the reader to notice and reconsider what might otherwise be taken for granted. Between Glances won the 1994 Adelaide Festival John Bray Award; his writing includes non-fiction, short fiction and novels. Lansdown is very much a West Australian poet. He has worked as a journalist and teacher, including time as an Education Officer in the WA prison system. He lives in Dianella with his wife and family.
— Rob Riel

The garden is dry but the bird-bath
brims with black water from the bottom
of the dam. Beside the gravel path

two stumps beckon small birds from the bush,
invite with a voice they never had
when fused, infused with the sap’s green push.

One, on its plane, bears sugar and grain.
The other, in a glazed clay dish, holds
the dark dregs of last winter’s light rain.

A neat, white-naped honeyeater takes
a bath. A fantail alights to flirt.
On the flat grass nearby, like snow flakes,

a fall of rolled oats. Be still. Don’t speak.
Share this communion: a blue wren is
breaking a white wafer with his beak.

Unlike other trees, the Norfolk Island pine
neither gives up and droops over nor disperses
into branches. No weeping, no compromise.

It surges straight up. Even its laterals
support the single perpendicular.
Each ring of branches is a set of guys

anchored to the sky to keep the centre post
poised. Diminishing in diameter,
the spoked strata shape a tent

as a farthingale shapes a dress.
The green frame, tall, conical, waiting
to be covered. Trim the sky for a canvas.

Peg it down. Don’t let it flap loose
from your imagination. Gales are gathering.
Strong winds are coming. Stake out

your tent. Enter in. Enter in to the calm.