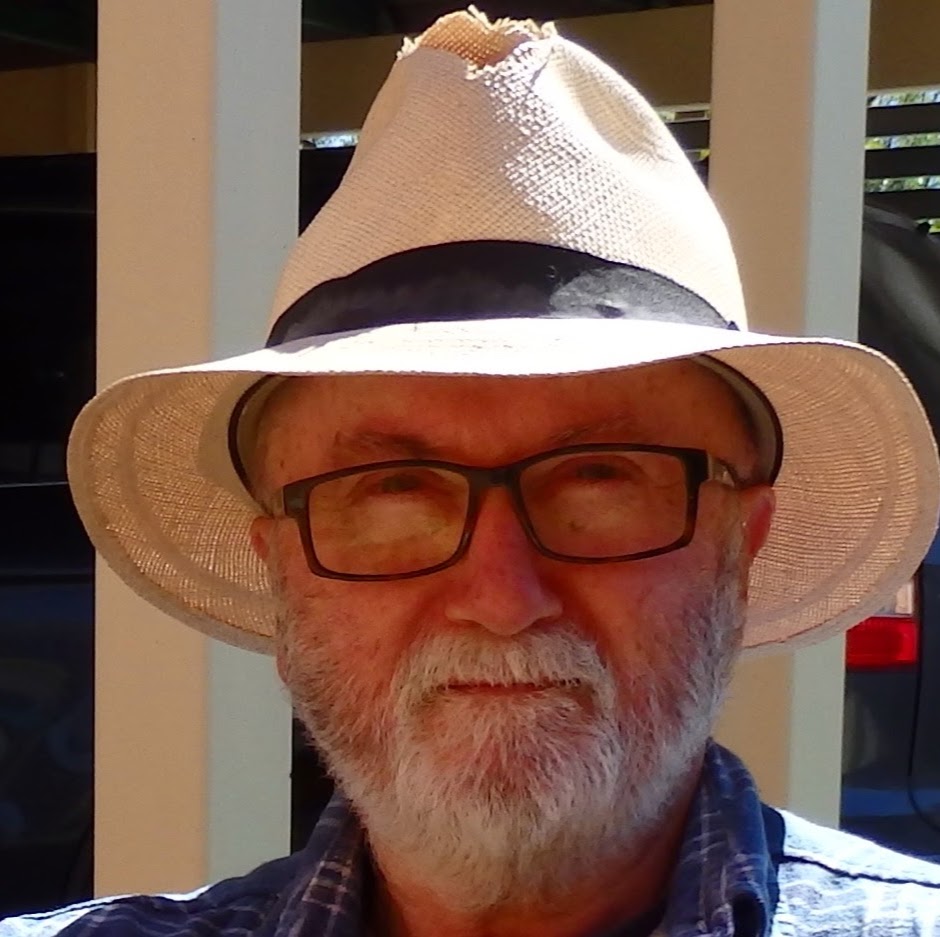 3. Elegy for my Mother

4. Walking to the Meeting

See also biographical and bibliographical information further down this page.

from our wind chimes

So she gently hums

alive in the earth

Elegy for my mother

among our cheery Christmas mail.

a mixed blessing the nurses say.

Mixed? Yes, she had grown so frail.

Death danced across our trail

At her wake there was much to say

about sport, weather and local ale.

now the undertaker wants his pay.

Behind a cloud the moon is pale.

A mixed blessing, so they say:

WALKING TO THE MEETING

Walking to the meeting,

I watch my weight.

The hospital street is

quiet as a night ward.

is as comfortable as

forgotten how it feels

to be drunk, to

on a Sunday morning.

It takes a newcomer to

shake me up again.

His eyes dart from

and don’t see a thing.

He shakes, he sweats,

he thinks we’re all

right. He is keeping

us sober if only

and tell my story:

the ism in youth,

but I am going

to my story, the drama

on a local cliché:

‘This is my recovery

room.’ I sit and smile

but he is staring

at my shoes. And

I remember that, too.

The cat fidgets on the parapet

facing the roof next door

testing her nerve against

she stands, and sits, and whips

her tail, and partly sits but

stands again, and – just as

I write her fright – she leaps.

Plonk. All four on roof tiles.

It wasn’t so far. Now

she digs along the gutter,

and such easy prey. A brave heart

on an autumn day. I’ve been

fidgeting for days, getting up

and down, brewing tea, forgetting

© Andrew Burke
from One Hour Seeds Another

In sunshine on grey cement

crossing and dotting their way

to their own stringless music

As I back down the drive

my wife in her flowing caftan –

waves her arms between the gates

but the music I hear is Cage-like

a gentle marimba of dandelion heads

playing in the grass centre of our drive

beating and twinging on drive shaft

At the gate my wife jumps in and says,

‘Now, we mustn’t forget the bank.’  Then

turns to see me fidget: ‘What are you doing?’

Percy Grainger did with piano rolls.’

© Andrew Burke
from One Hour Seeds Another

6.30am. The overture to day in Linfen is played with household hammers on commercial building projects. Cicadas sing gently in madrigal phrases. The irregular rhythm of the hammers gradually joins the first honking vehicles of morning, various toots on a full range of flutes. The street vendors put out their vegetables and fruits and squat beside. A few have weighing machines for basic conversion of goods to cash. There seems no hurry here, no anger, no overt competition, no conflict between workers and bosses. The town grows daily, and the shops change hands overnight. One man is gone from the streetscape. He wrote an anti-government message in his shop window and was not there the next day. A new shop has opened there now, selling fashion for young ladies.

By 8am the town is a bustle, going about its business. A pale grey smog hangs in the air which a light morning breeze seems incapable of shifting.  Three mature citizens sweep away the remnants of last night’s fireworks with bush-brush brooms.

bottle and glass and book open but hardly read

waiting for Father who is as always late.

As always late he rolls in—I must have been

the bad news he had delayed telling: old lady dead

on Stirling Highway by his car’s thump—

‘She just walked out into the car, she was old,

she chose me.’ He drove to the pub

to delay the telling of it

but told the boys in the bar well enough.

I was dreaming so who told me? I must have known

early next day before I picked up the phone

You can buy your way out of it this time

drinking crates of Coca-Cola, no way to quench

his thirst: diabetes brought on by shock. Hospital,

morning and night. Not too much sun, no boozing,

at The Naval and Military Club, soul of the party

of ‘the Killing Pen’ at Steve McHenry’s famous pub,

he could not change his habits overnight. So

comas came on. Mother and I forcing sugar in water

down his throat, one on each side of the bed,

passing the glass across hurriedly as he

rolled, getting it into him

for his life’s sake.

His brothers flew across Australia to his hospital bed

to force him out of their rich company. He signed.

Pride would not let him fight them off or ask

for help. Doomed by guilt, trapped

by alcohol, sick and tired, he went to bed

yet one more time. This night jellbowls of blood came

jumping out, Mother sick herself on the couch,

I called the doctor. Mother and I rode

in the ambulance, sat in cold hospital corridors

while I cleaned Father’s blood off their bedroom floor

as best I could. My fourteenth birthday. He died

as best it could

fifteen years later and drove me

to a cliff’s edge where I aimed at the sky.

My car bogged and I ran

to that doctor’s house, vomited over him

as he opened the door, 5am, startled.

through green pine trees out my window, worried

wife and child at home. I stared, wondering who was I,

asked my tidy shrink for LSD, I wanted it all to rise,

to know the sweetness and horror of all my days.

I controlled me on pills and platitudes.

of a writers’ cottage by the ocean, where

the music of Dylan and Zappa mingled with Miles Davis

beyond the sound of colonial banjos.

daisychains around our necks and in our hair,

we drove at dawn to

giant trees in the yard, minimalist paintings on the walls.

In my mood even eggs-and-bacon looked bohemian

as I drank orange juice, champagne-and-orange,

alcohol I could find… Made my usual Jesus jokes

about turning water into wine, wine into water. Spent

late afternoon attempting to blow up petrol stations across

the escarpment with strips of cloth alight, laughing

uncontrollably at who knows what.

fear and loathing, my combatant driving … I swung

an axe at my love’s neck, went to lunch Friday

came home Sunday, not knowing where I’d been,

who I’d seen, days of life lost. With me late as usual,

wife gave up waiting, locked our windows and doors.

I slept black nights in a ratty tin shed.

Three of Andrew Burke’s poetry collections can be purchased online — Undercover of Lightness & One Hour Seeds Another from Walleah Press, and Whispering Gallery from Sunline Press. Click on a book cover to buy a book. 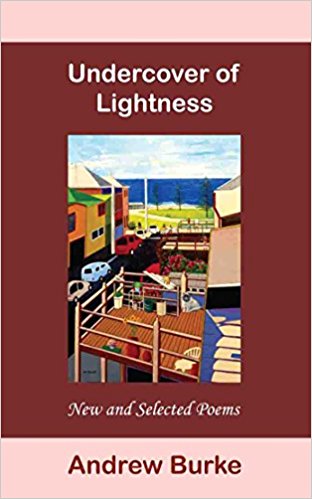 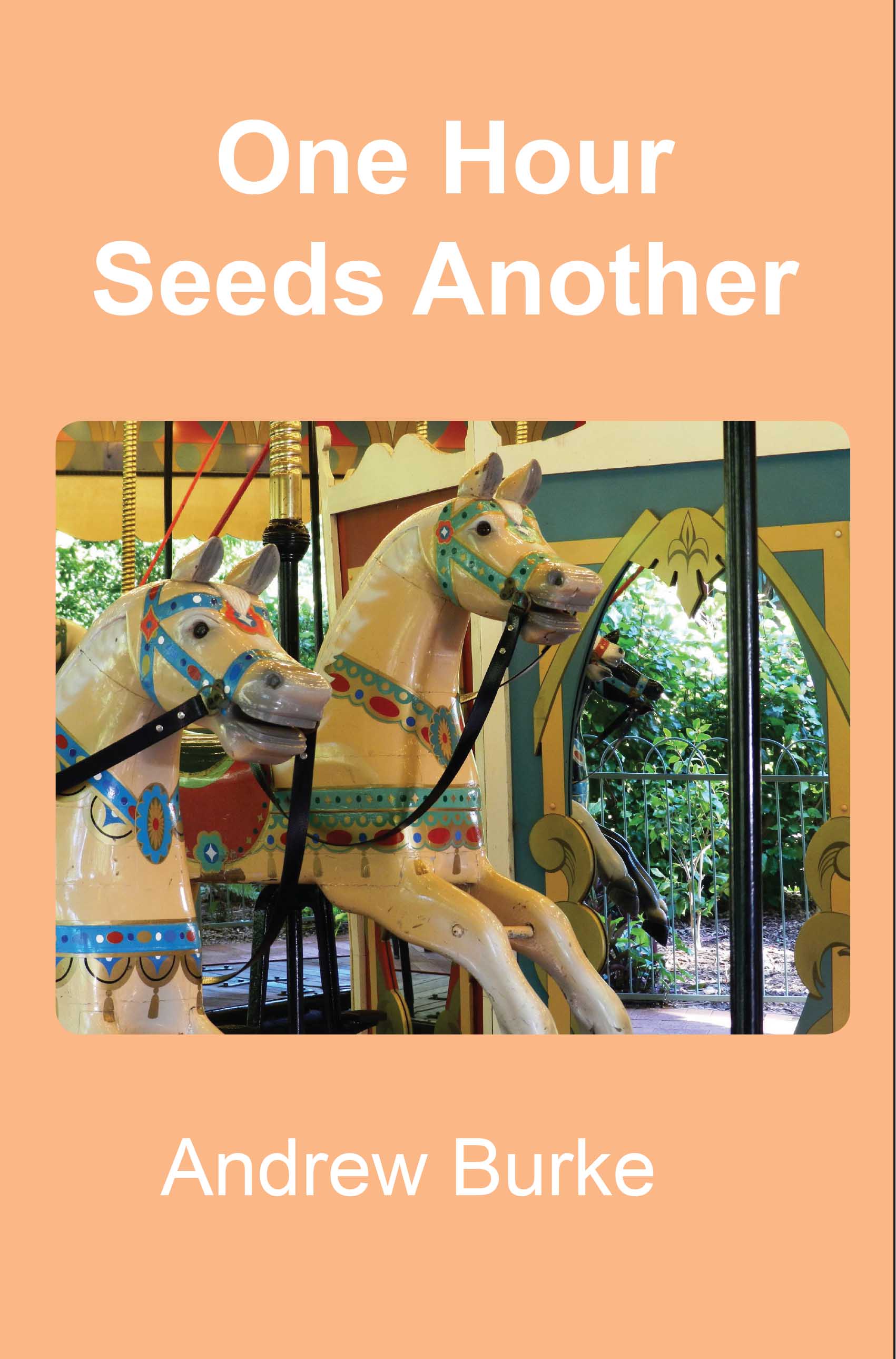 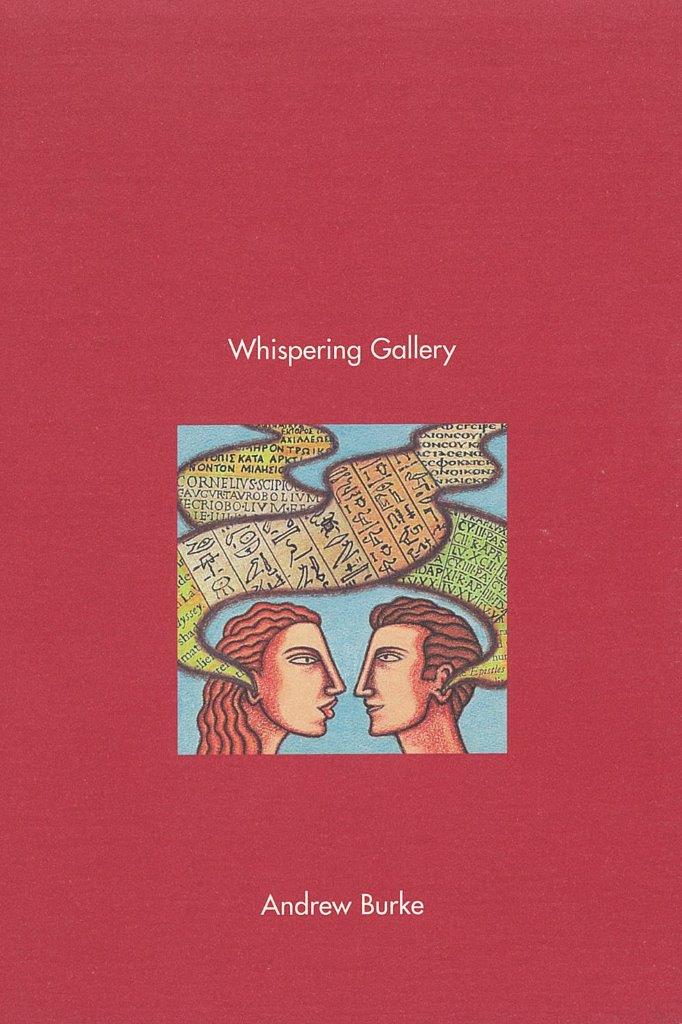 ANDREW BURKE was born in Victoria in 1944, then moved to WA as a toddler. He was educated there, then hitchhiked (in the ’60s) to further his education at factories, etc, in Melbourne and Sydney. After work at radio stations in Perth, he went on to be a Creative Director in advertising agencies, all the time writing stories, plays and poems. In middle-age he went into academia, studying and lecturing in writing and literature. Burke has published thirteen poetry collections, one novel and a smattering of short stories, book reviews and literary criticism..

After five years living in the Riverina area of New South Wales, he returned to Perth in 2017.

For more details, go to https://en.wikipedia.org/wiki/Andrew_Burke_(poet)

Return to OTHER POETS & POEMS OVERVIEW

Andrew Burke is Andrew Lansdown’s friend. You can contact him through Andrew L. Send an email to Andrew L. and he will forward it to Andrew B.