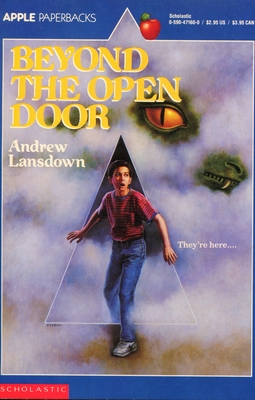 Beyond the Open Door

Beyond the Open Door is an American edition of With My Knife.

(See the With My Knife page on this website.)

The text is the same. Only the title and the cover have been changed.

The initial print run of 42,000 books was sold out within eighteen months. It has not been reprinted.

However, the Australian edition, With My Knife, has (as of May, 2008) entered its eighth printing and is still available from bookshops in Australia and New Zealand.

This book is very scary. Colyn cut a piece of cardboard that let to another world. It may have to do with the strange knife he used to cut it. When he starts seeing the dragons coming he was to think of a wise plan. Andrew Lansdown did a great job with this book. BUY IT!

Focusing on the loneliness and seclusion of a boy and his father, Beyond the Open Door emphasizs the imagination as a Colyn, a farm boy, carves peices of wood that seem to change…
When I read this book for the first time in 7th grade, I stopped reading books altogether. It wasn’t because the book was bad, it was because it was so good. I wanted a sequel, and they just never had it; thus, I never read for fun again until senior year, when I rediscovered the book.

Format: PaperbackVerified Purchase
Great shape. Quick and easy shipment. This was one of my favorite books when I was younger and it got lost in transit when my parents moved. So glad to find it again.
.
http://www.amazon.com/Beyond-Apple-Paperbacks-Original-Title/dp/0590471600/ref=sr_1_3?s=books&ie=UTF8&qid=1458365976&sr=1-3&keywords=andrew+lansdown

Click here to open a downloadable pdf of the first chapter of Beyond the Open Door/With My Knife.